Comments Off on Interview: Mirold Edmond 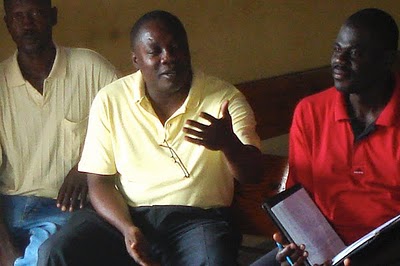 Mirold Edmond was born and raised in Gran Sous and served in the Haitian government during the early 1990’s. He is campaigning in the November election representing the island of La Gonave in Haiti’s Parliament.

How many years did you initially spend living in Gran Sous?

After living in Port-au-Prince you became a politician and later lived in Miami. What kind of differences do you see between Haiti and the U.S.?

There are big differences between the life I have in Gran Sous, Port-au-Prince, and the one I have in Miami. There is no opportunity [in Port-au-Prince]. All the chance you have is that your parents can send you to school. In Miami the difference is huge because whatever age you are, you can be successful because there are schools. In that sense there is a huge difference. Not only in Gran Sous, but in all of Haiti.

Beside your personal connection to Gran Sous, do you maintain a working relationship with the community leaders in the village?

I am running for office now and most of the leaders are the ones campaigning for me to become elected. I helped them open a new high school in Gran Sous and for that reason so many children who couldn’t go to school in Port-au-Prince, can now go to school right next to their house. That is the reason we have more people educated and going to high school. They are the ones who asked me to run again. I did not know that the work I did could have that impact on people. This community responded very positively to what I did and now they asked me to run for office again.

What are some of your goals and aspirations for both the people of Gran Sous and the surrounding areas?

When I am elected, I will be elected for the whole island, which is two districts united in one. Gran Sous is just a part of the whole you see. As a native of Gran Sous I would like to see more opportunity for access to health care, good roads. For example, now they have clean water. I’d like to see people have water in their house, more ability to work, for them to have good homes, and for them to have more access to education. I would also like to see a park where they can go and spend time with friends.

Although you’re not formally a part of APDAG, what do you think motivates them to continue working so hard?

The people in Gran Sous are very concerned about the community and in the past they wanted to do something, but weren’t able to. Now that someone has come to help, they want to take advantage of the opportunity. They knew they did not have good lives because they drank dirty water, but that’s what they had to do. Now, with the arrival of Roots they know they have an opportunity and they do not want to lose it.

Before, some people didn’t want to do things, but because they see Chad and [other] people not from Gran Sous so interested, they think “Why don’t I try to do something too?” The impact is wonderful and this is significant.

How have things changed in Gran Sous since APDAG was established?

I can tell you, it brings a lot of hope to the community. Before Roots of Development, they took the water to the lab, but it was not drinking water at all. The results said we should not drink it, while people were drinking it every day. Some people even passed away. They’d get some kind of fever or stomach problem. Now that APDAG is there we have clean water, we took it to the lab and they say it’s clean, it’s normal for people to drink.

Then some people did not have a house to stay in. Some people, some poor people now have a house to live in. They are so grateful for this. It is a good thing for the community. Now people expect a lot to come with Roots of Development. They expect to have economic development, small loans to do business, improvements in health care. I believe this is wonderful for the community. The work that they are doing there is priceless.

How has Roots of Development supported APDAG in their efforts?

It is not a project built for the community, but with the community. It is not as if someone comes from outside and says “I want to do this for you”. Because Roots sits down and says “What is the problem, what do you want to achieve?” that is the main strength of the project. Financially they help and they share experiences with the people.

This interview will be read by a lot of Roots supporters; do you have anything you’d like to say to them specifically?

Actually, I would take this opportunity to thank all of the supporters of Roots because I know some of them do not know Gran Sous. They are doing things because they want to help somebody, a human being, a community, so that is good, something wonderful.

I want to invite them to come. They can come and see for themselves the opportunities people have in the community and see how people can live in a community without access to health care and work. Not even a quarter of the community is working and they will ask “How can people live?”

It is a very joyful community. They like foreigners and when you come they will want to talk to you.