Comments Off on A Truck and Tools for Gran Sous

A Truck and Tools for Gran Sous 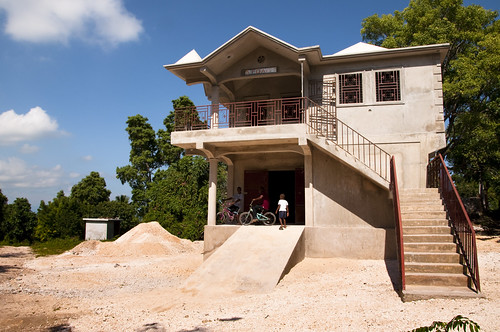 After two and a half years in the making, Roots of Development has finally sent a 26-foot box truck stuffed to the brim with donated tools of all kinds from Storrs, Connecticut,  to Gran Sous on the island of La Gonave, Haiti.

This initiative, headed up in early 2009 by long-time Roots volunteer, Marty Bissonnette, started by word of mouth—asking neighbors, friends, and relatives to donate whatever unused tools they had lying around their homes. Slowly but surely the tools started piling up in Bissonnette’s Connecticut home. As Marty watched the donated tools multiply, he began to wonder how he would transport all of them thousands of miles away. A thought occurred to him, why not buy a truck? Not only would the truck easily address the issue of getting the tools all the way to Haiti, it would also be extremely useful to APDAG, Roots’ community partners on La Gonave. He shared the idea with Roots staff, and took on the task of finding a truck that was inexpensive but reliable and large enough to transport al the tools. He eventually found a used GMC truck in New Hampshire.  The truck was in really great shape and only $4,000. After two and a half years of collecting tools of all kinds, including a cement mixer, multiple generators, a ladder, and 16 bins filled with miscellaneous tools such as shovels, pick axes, screwdrivers, garden tools, and the like, it was time to transport them over 1,600 miles south to La Gonave, Haiti. So Marty and his buddy, Steve Bargiel, hopped in the un-air conditioned truck on Saturday, July 9th and started heading south from Connecticut. Stopping in Washington DC for a night, the two made it to West Palm Beach, Florida on Monday, July 11th, tired and hot, yet satisfied. Marty says that though the lack of air conditioning was a struggle driving in the Florida heat, the truck drove like a dream and he has faith that it will benefit the community of Gran Sous for many years to come. The truck and tools will be en route to St. Marc, Haiti, by the end of the month, taking only 5 days to arrive in Haiti. Once in St. Marc, Lola Poisson, the wife of a former Haitian Ambassador, has kindly offered to accompany the truck through customs, at which point APDAG will arrange for the truck’s shipment to Gran Sous. Thank you to everyone who donated tools or supplies of any kind. 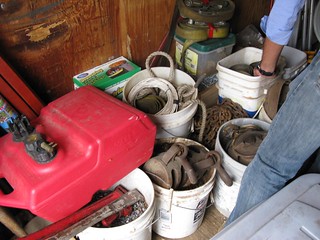 With your help, APDAG and the community of Gran Sous are obtaining greater independence. The tools will be used in a tool rental facility that will provide APDAG with a source of income as well as the supplies to continue construction in their community. APDAG will use the truck to transport construction materials for their use or resale in Gran Sous and will use the truck to deliver concrete blocks in a future community-managed business. At the end of the long drive to Florida, Marty commented, “This has been a wonderful experience, seeing everyone come together – it’s nice to see a real connection between Roots’ supporters and the community of Gran Sous.”