Comments Off on August Newsletter: Cholera Outbreak in Gran Sous 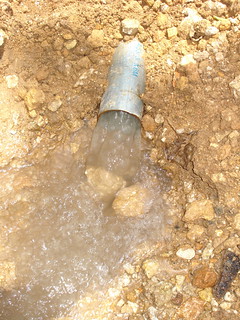 When cholera reached the mainland of Haiti in October 2010, we crossed our fingers and hoped the epidemic would not cross the channel to the island of La Gonave.  Unfortunately, on July 3rd Chad received a panicked phone call from Jackson Etienne, a member of APDAG’s Health Committee in Gran Sous, explaining that many community members were sick with diarrhea and vomiting. The illness was affecting people of all ages from all over the community, but Jackson did not believe it was cholera.

Chad’s heart sank at the prospect of an outbreak of cholera in Gran Sous, but before assuming the worst, he asked APDAG to deliberate as a group and decide what needed to be done in order to find out exactly what was going on. The members of APDAG made the decision to get their water tested in Port-au-Prince and asked Roots to sponsor travel costs of one of the sick community members to a clinic in Anse-a-Galets, a port town about an hour and a half drive from Gran Sous. A young boy was chosen to make the trip to the clinic accompanied by his mother and Jackson.

The clinic was packed with people from all over the island, all of which had the same symptoms as the young boy – consistent vomiting, diarrhea, and leg cramps, all of which are symptoms of severe cholera.  Cholera is an acute, diarrheal illness caused by infection of the intestine with the bacterium Vibrio cholerae. The infection is often mild or without symptoms, but can be severe. Approximately one in 20 infected persons has a severe form of the disease. In these persons, rapid loss of body fluids leads to dehydration and shock. Without treatment, death can occur within hours. Though the young boy was hooked up to an IV with a salt, sugar, and water mixture used to cure severe dehydration caused by cholera, he passed away a few hours later.

After receiving this heartbreaking news, Chad contacted World Vision to see if they knew what was going on, as they have set up multiple cholera treatment clinics on the mainland since the outbreak in October, 2010. A few days after contacting them, on July 13th, they confirmed that cholera had reached the island of La Gonave. World Vision explained to Chad that they were working on convening community leaders from all over the island in order to discuss steps they needed to take during the coming weeks and to plan hygiene workshops in order to help slow the spread of the disease. Cholera is most often spread through both drinking water and food contaminated with the bacterium. In an epidemic, the source of the contamination is usually the feces of an infected person exacerbated by inadequate water and sewage treatment.  Only 63% percent of Haitians have access to improved water facilities and in rural areas of Haiti, like the town of Nan Plim, the percentage is as low as 55%. To prevent further transmission, workshops are conducted during which community members are taught how to properly wash their hands, are instructed to boil all water used, thoroughly cook all food to be eaten, and to burn all cloth that has come in contact with any infected persons.

Though APDAG had recognized their need for clean water long before the outbreak of cholera, once confronted with the disease it became an even more pressing issue.  A few days after  confirming that people were sick with cholera, Chad was put in contact with a World Vision doctor working on site in the Gran Sous area on La Gonave. When asked what sort of aid would be most helpful to them, the doctor responded by saying they were having “staffing issues” and needed help getting access to clean water on the island. With the money raised through One Day’s Wages to finally begin the water purification project in Nan Plim, we are now working to raise money to also fund a rainwater collection tank and install a shower facility with proper spacing away from all drinking water sources in a nearby community. World Vision has discussed setting up a cholera treatment center in Gran Sous or Nan Kafe. We are also exploring ways in which our organization and APDAG might be able to help World Vision address their staffing needs and other ways we can support each other with medical supplies and human resources. We hope that by working together on all of these projects we can tackle the cholera epidemic on La Gonave quickly—ending the spread of the disease and loss of life.