Comments Off on October Newsletter: An Update on Cholera and our Initiatives for Independence

October Newsletter: An Update on Cholera and our Initiatives for Independence 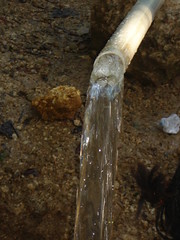 The last time we wrote to you, the island of La Gonave had been hit with a cholera outbreak, affecting the residents of Gran Sous and surrounding communities.  Since our last update, however, we are relieved to report that the cholera situation in Gran Sous has improved.

There has been less rainfall which has reduced the chances of water contamination. The decline is also being attributed to heightened awareness of the presence of the disease in the area, leading to an increase in cautionary hygienic practices.

When the cholera outbreak hit, Roots was in the middle of a clean water campaign with One Day Wages. The campaign was able to bring in enough money to fund Roots’ next water treatment project in the community of Nan Plim.  While the actual construction of the clean water system has yet to begin, community residents have displayed their eagerness to start the project by beginning to collect rocks that will be used during construction.  World Vision, another organization working on the island, stated they would be open to reviewing proposals submitted by APDAG concerning health and sanitation projects that could prevent cholera from spreading.

Construction of these water projects will begin once engineer Yee Chen has arrived on the island at the end of November.   Chen, a graduate from University of Michigan, has used her skills in several countries including a stint in the Dominican Republic with the Peace Corps.  Chen reached out to Roots of Development over a year ago and offered to work as an engineer in Gran Sous in a Peace Corps-like agreement.  Chen will work with Rodin Childeric, APDAG’s local engineer, to supervise the technical aspects of future projects. Additionally, they will work together to explore the possibility of constructing a larger system that could bring clean water directly from the source to the actual homes of residents.

After Marty Bissonnette and Steve Bargiel’s long journey with the truck and its tools from Storrs, Connecticut to West Palm Beach, Florida in July, the vehicle reached its first Haitian destination, St. Marc in late August.  While the hard part of the journey may have seemed to be over, the process at customs proved to be more arduous than expected.  After hours of sitting, waiting, and of course negotiating, members of both Roots and APDAG managed to get the truck and its contents through customs.

Unfortunately, the journey did not end there.   Due to the size and mechanics of the truck there was concern about the practicality of getting the truck to La Gonave and maneuvering it around the island safely.   After discussing the possibility of 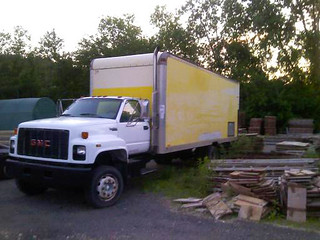 changing the transmission, cutting the truck’s back end, and raising the truck higher, everyone came to the conclusion that it would be easier to sell the truck in Port-au-Prince.  In order to get the tools to the island, the team hired people in Kariyes to unload tools onto a ship and transport them to Anse-a-Galets in La Gonave.    Once the tools arrived in La Gonave they were moved to another truck and taken to Gran Sous.   Despite arriving late at night, dozens of community members volunteered to help unload the trucks.  Now APDAG awaits Marty Bissonnette’s trip during the second week of November.  During his trip Marty will teach residents how to use some of the more specialized tools.  By December, APDAG will have started their second revenue generating project.

APDAG’s first revenue generating project began late this summer. In mid-August a communications center (some might call it a bit of an internet cafe) was set up. The center is entirely powered by solar electricity, and brings in revenue by charging fees to charge cell phones, place long distance calls to friends and relatives living abroad, and surf the web. The communications center has experienced some glitches with the phone line, however the business traffic so far has been great enough to cover the monthly bill for the internet service and to pay an employee to manage the operations. The profits from the center will also begin paying Lochard, a member of APDAG who oversees the purification of the water supply.

GFDAG, the women’s group working within APDAG, is enthusiastically working 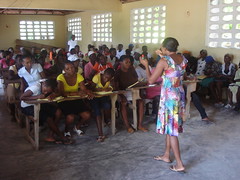 toward their vision of creating their own independent businesses.  So far working with GFDAG has proven to be an exciting and uplifting experience for all those involved.   After going through the first training workshops, participants are very vocal about the how these new skills have impacted both their professional and personal lives in only a matter of weeks.  After receiving funds from Seven Hills Global Outreach to cover the costs of  the remaining workshops, the second set of trainings will soon begin.  If their enthusiasm and hard work continues, GFDAG may begin implementing their business plan before the end of 2011.  To follow GFDAG’s progress and other activities in Haiti and the U.S., follow us on Facebook, and Twitter.

← A Soapbox in Haiti
October Newsletter: An Interview with Ms. Elza Dejean →