Comments Off on October Newsletter: An Interview with Ms. Elza Dejean 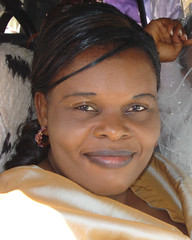 In 1992, traveling far from her native home on La Gonave, Elza Dejean moved to the U.S. where she has since established a home for her three children.  Like many Haitians living in the U.S., Elza sends money back to her family in Haiti, but she has also become a donor to Roots of Development.   This month we decided to highlight Elza’s story to show that although some community members have left Haiti, they are still hopeful enough to not only support family members, but community initiatives as well.

Elza was born and raised in Gran Sous and at seventeen moved to Port-au-Prince in order to continue her education. Elza witnessed the violence unleashed by Raoul Cedras’ coup d’état in 1991, jeopardizing her safety.  In fear of the unstable political climate, Elza left Haiti for Florida hoping to pursue her dreams, free from violence and other limitations.  When she attempted to improve aspects of her life, Elza’s efforts were often fruitless due to a lack of opportunity in Haiti. She shared her frustration saying, “[The government] doesn’t care if you don’t have a place to stay, they don’t care if you don’t have money. There aren’t even jobs for students who finish school.  You finish all your education and you can’t get a job over there.”

Elza was not only presented with limited opportunities but explained how the mistreatment of women and overall corruption also acts as a barrier for employment.  “My parents supported my sister to go to nursing school.   She finished and applied for a job.  The employer told her [that if she wanted] to get a job she needed to have sex with him.”  Elza’s sister refused and lost the opportunity for employment.  This was the environment which Elza left.  During the past decade, the Haitian government, pressured by Haitian feminist groups, has passed legislation to protect women.

Now happily living in Florida, Elza appreciates the opportunities she has been afforded in the United States.  “I have a chance to accomplish my goals. If I really wanted to finish [my] education, I could finish whenever I wanted to. If I were to go to school [in Port-au-Prince] there would be [threats of] shootings.  I have everything here, I have kids here and family.   When I was over there, my dream was to be a nurse but I couldn’t finish school. Now I am a certified nursing assistant.”  While Elza has no intentions of moving back to Haiti she still visits her family in Gran Sous and is inspired to help where she can.  “I have sisters I left behind, but I have been back since the earthquake.  I helped some of my family with clothing and shoes.  I [have] helped as much as I could and I still do. I love helping but as a single mother I don’t [always] have the chance.”

Since leaving La Gonave, Elza has noticed many changes around the region she grew up in.  “Last time I went I didn’t recognize a lot of places, especially the [area around the] water source.”  Elza expressed her frustration with the Haitian government, which she claims rarely provides any support to her community.  As a part of the Ouest department in Haiti, La Gonave shares limited resources along with Port-au-Prince, but most government resources are often directed toward the capital city, overlooking the island.  “The condition over there is very bad and they have no money to help.  People on the island never participate in government because the government never does anything for them. We have to help ourselves.”  While Elza is underwhelmed by the government’s efforts she is extremely appreciative of the work that some organizations, including Roots, have done throughout Haiti and La Gonave. “Roots of Development and the volunteers that come with Chad make a lot of difference and change a lot of people’s lives.”  When commenting on how these organizations are affecting the lives of her family Elza explained, “They are so excited that the water is clean and don’t know where they would be without such help.”

Despite many of the current problems in Haiti, Elza continues to express hope for her country and Gran Sous.  When talking about Chad and Roots of Development she said, “I really encourage him especially after seeing how hard he is working. It’s not often you see people helping others today, especially when they’re not family members.  If a lot of people support Roots and keep helping, one day all of the community’s goals will be attained.”   Elza continuously expressed her desire to help more and the importance of others participating in similar ways. “I have a dream that if I ever have the money, I will help orphans go to school. As long as I have the money I will keep helping because that’s a good thing.  We have the ability to help a lot of people.   If everybody did their part to help, there would be a lot of change.”

← October Newsletter: An Update on Cholera and our Initiatives for Independence
Under the Same Sky: An Event for Haiti →