This Saturday, July 14th, Roots of Development is hosting A Taste of Haiti, our 4th Annual DC Fundraiser.  During the event, Ms. Danielle Saint–Lôt will be presented with the Max Pulgar-Vidal Award.

Ms. Saint-Lôt is the Co-Founder of and Special Advisor to Femmes en Démocratie.  She currently serves as an associate and CEO at Caribbean Business Consulting (CBC).  Ms. Saint-Lôt was the first Haitian woman appointed Minister of Commerce and Industry, previously serving as the Minister of Tourism.

Through her work with both Femmes en Democratie and Vital Voices, Ms. Saint-Lot has long been a strong advocate for women in Haiti.  After the 2010 earthquake, she stressed developing the Haitian economy outside of Port-au-Prince, where 80% of economic activity took place before the earthquake.  In an interview with NPR, Ms. Saint-Lot emphasized  the need to rebuild the country around education and economic opportunity.

When GFDAG, Root’s partner women’s group in Gran Sous, wanted to start a business, Ms. Saint-Lot steered Roots and GFDAG toward Femmes en Democratie.  She connected Roots to Brunette Merise, a highly qualified consultant, who would ultimately host thirty days of workshops for 91 women.  Femmes en Democratie helped organize GFDAG to prepare them to run a business.  Basic, but essential skills were taught, including sales and marketing, accounting, and the concept of credit.

Ms. Saint-Lôt’s commitment to women throughout Haiti has focused on not only empowerment, but also establishing relationships between local communities and social classes alike.  We are very honored that Ms. Saint-Lôt for this special night.

Max Pulgar-Vidal was a man of extraordinary intelligence, vision and generosity who led a life of service to the world community.  Max was an international economist for the World Bank prior to working in the Office of the Executive Vice-President at the Inter-American Development Bank (IDB).  Roots of Development is proud to have the opportunity to annually honor our friend and mentor Max Pulgar-Vidal in recognition of his distinguished life and in gratitude for his enlightened encouragement and generous support during the early stages of our development. Each year, the Max Pulgar-Vidal Award is given out to an individual who has shown continued commitment to Haiti and sustainable development through knowledge, empowerment, and dedication.

In addition to the award presentation, the night will feature a Haitian food competition between local Haitian/Haitian-American chefs.  Guests will sample food from each chef and vote on their favorite.  The event will also include live music and an array of V.I.P. judges, including Ron Duprat of “Top Chef,” Pierre Garcon of the Washington Redskins, and Anedie Azael, Miss Haiti 2011! Eat, drink, and cast your vote on the best pate dish of the night.

Tickets are $75 for General Admission and $50 for Young Professionals. We look forward to seeing you there! 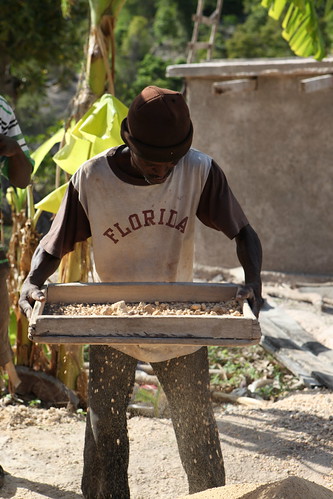 Five years ago Gran Sous decided that their top priority as a community was access to clean water.  Today, our partners APDAG are not only assisting their neighbors gain access to water, but also envisioning a future less dependent on Roots of Development.

In April, a small group of volunteers visited Gran Sous, delivering funds to build a toilet next to the community center housing APDAG’s office and small enterprises.  Less than three months later, the toilet is complete.  Five years ago this community would not have carried out this project with such ease.  APDAG continues to not only improve sanitation in Gran Sous, but also in surrounding communities.  While sanitation improves in Gran Sous, APDAG continues to help surrounding communities.

With the help of Yee Chen, the water project in Nan Plim has finished construction.  Once solar panels are purchased and installed, residents of Nan Plim will have access to clean water in their own community.  In between days of work in Nan Plim, APDAG’s leadership has held meetings with the towns of Nan Riske and Nan Kafe to discuss future water projects for 2012 and 2013.

While tangible products are always exciting, the intangible projects are always the toughest to translate to our supporters in the U.S.  This aspect of our work is integral to the success of every project.  APDAG’s future construction materials business will be their largest project yet.  In preparation, Roots is currently negotiating with the Grameen Creative Lab to conduct workshops that will ultimately result in a solid business plan to make the business a successful local employer and revenue generator for future projects.  APDAG already owns a tract of land thanks to supporters in Connecticut, but they still have to buy machinery and construct an office to house the business. 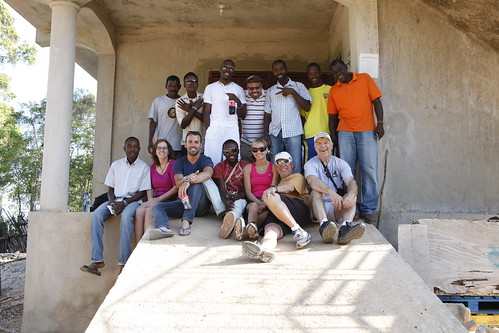 As APDAG moves forward, they can take advice from GFDAG, the women’s group within APDAG.  These women have already conducted a series of trainings to start their own small business, which will launch this August.  The women have just opened a new bank account to deal with importers in Port-au-Prince.  In addition to creating jobs and easing the burden of many women, GFDAG’s profits will eventually help local orphans attend school.

If you are in the DC area and would like to learn more about our recent work, we invite you to join us at A Taste of Haiti:  Roots of Development’s 4th Annual DC Fundraiser.  On Saturday, July 14th, from 6:00pm-8:00pm, Roots will be hosting a food competition between Haitian caterers and chefs.  Guests will drink wine and judge their favorite pate while trying other Haitian dishes.  Guest judges will include Washington Redskins wide receiver Pierre Garcon, Chef Ron Duprat, Miss Haiti 2011, and Heather Robinson.  Tickets are $75 for General Admission and $50 for Young Professionals.  We hope to see you there!