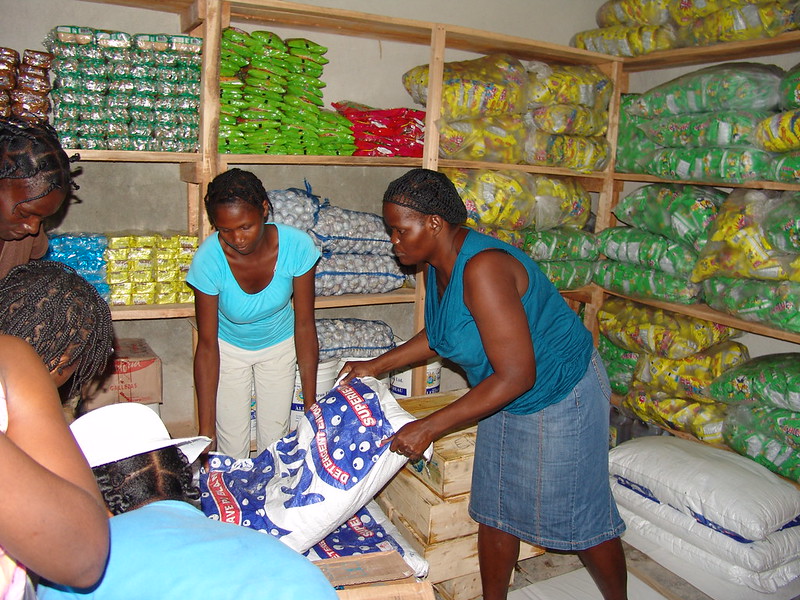 In mid-September of last year, GFDAG embarked on an exciting community business venture. They opened a store selling non-perishable food items to surrounding communities. Since opening, the business has had an unpredictable amount of success. By the end of November, only two and half months after their opening, GFDAG reported a profit of US$3000 (a 20% return on the original investment of $15,000). Due to increasing demand, the store has started having to replenish its inventory almost every 20 days.

With such success, GFDAG has had to reevaluate their business’s short term and long-term objectives. A part of that reassessment involved prioritizing reinvestment and expansion. Enduring the possibility

of theft, poor weather conditions, and unpredictable public transportation, the women have had to make more frequent trips to Port au Prince to meet the demand of increased sales. Reinvesting their profits has increased inventory available and will ultimately reduce these unsafe trips.

To help with expansion costs, GFDAG has considered loan options. However, the lack of capital and apprehension over interest rates has made this option impractical. With this in mind, Roots of Development is preparing to make a second investment in GFDAG’s business.  Once an additional $9,000 is raised, Roots of Development’s financial commitment to the business will have been met.

Once GFDAG has increased their profits significantly, the women would like to either rent or build a larger store to expand the business’ size GFDAG also plans to hire permanent employees for the store as they are currently operating with the help of two volunteers. They also seek to install solar panels to bring electricity to their store. This would create better security for the employees and volunteers working at the store in the evenings. Although re-investment is GFDAG’s top priority at the moment, they have not lost sight of their original goal to support the orphans and vulnerable children of the community with greater educational opportunities. The success of this initiative, however, depends on the success of the business.

Overall, the members of GFDAG have already seen a positive impact in their community since the establishment of the business. Before the business opened, people in the community had to travel miles by boat and public transportation get food and other basic needs. They would even have to wake up at as early as 5 am or 6 am to begin the journey. Since the opening of the store, the women in the community no longer need to travel from La Gonave to Port-au-Prince to get the items they need. This has truly improved the quality of life for members of the community, eliminating an arduous journey and saving them money.