All posts in Water

Comments Off on Nan Plim 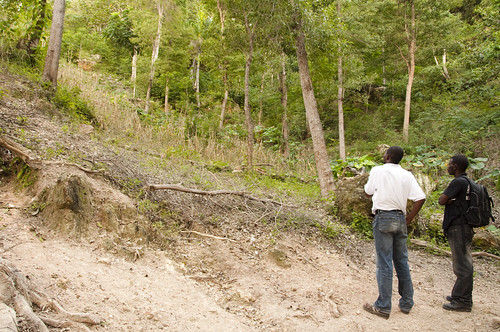 END_OF_DOCUMENT_TOKEN_TO_BE_REPLACED

As the inaugural project of Roots of Development and APDAG (at that time called the Gran Sous Water Committee), capturing and purifying the Gran Sous water source posed issues that both Roots and APDAG had never encountered before

In July, 2006, after numerous community meetings, the local committee decided that improving the local water source was the most important community need to address.  Community members discussed the health problems resulting from their lack of access to a potable public water source, legal issues they could encounter, and evaluated the new project based on attempts to capture the source in the past.  Five members of the committee also visited a doctor in Anse-a-Galets to determine the prevalence of water-borne diseases in the area.  The community then set up a survey of the water source to determine the amount of people served and the quantity of water being taken from the source.  After the survey, a water sample was gathered and taken to Service National d’Eau Potable (SNEP) in Port-au-Prince for testing.  The results of that water test can be found in the Resources section below.

In the next phase, technical information was gathered for our volunteer engineers from Ecuador to begin a construction plan that would utilize gravity rather than pumps, which would eventually require maintenance.  A Haitian engineer and agronomist working for Concern International volunteered to conduct a topographical study, the results of which helped determine that the community could use an 18,000 liter tank.  Community members also asked for only part of the source to be captured and treated, leaving enough water for bathing, laundry, and animal consumption.  A list of materials was compiled and Chad set out to raise more funds once a total project cost had been calculated.

Before construction could begin, the site had to be prepared.  When workers dug into the ground they discovered large rocks, which then had to be smashed and cleared.  Meanwhile, hundreds of rocks were collected from the local area.  On one day all of the local schools coordinated to suspend class and assist the project by sending students to collect rocks.  Without community support from residents, the project would have taken much longer to complete.

Once all of the materials were gathered, engineers Javier Ordoñez, Jaime Barzallo and Andres Alvarado flew in from Ecuador to assist in the construction of the tank and pipe installation.  Construction continued throughout May, June, and July, 2008, despite Haiti’s sweltering heat.  In August, 2008, the second water test was conducted following the initial treatment to determine whether the purifying solution’s concentration needed to be adjusted.  The second test showed that Gran Sous’ drinking water was safe for human consumption.